Kincho coils are an irreplaceable part of life.

During a Long Tradition that Extends 130 years,
New Technologies have Always Been Developed from Scratch.

130 years have passed since Kincho founder Eiichiro Ueyama met H.E. Amoore in 1885 and received from him seedlings of the Dalmatian pyrethrum plant, which at that time did not grow in Japan.
Kincho was the first company in the world to develop a spiral-shaped mosquito-repellent incense, and it has continued to turn out a variety of revolutionary products designed for a healthy, pleasant lifestyle.
Kincho is now embarking on a course to building new traditions. 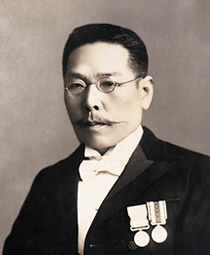 The Kincho trademark was registered in 1910. It was chosen by founder Eiichiro Ueyama who placed his faith in the rooster head to help realize his dream of seeing the company's products known, liked and reputed around the world for their health benefits. Owing to the high quality and a traditional advertising strategy, the Kincho Uzumaki became a familiar item to households in Japan and the world over, just as he had dreamed.
In the early 20th century, Kincho stepped up its advertising with a number of color lithographic posters so beautiful that they could be considered artwork, mobile advertisements on decorated old-timey trucks, and newspaper ads for big bargain sales with prizes.

Origin of our trademark design