close Ties between Republic of Serbia AND KINCHO through Pyrethrum flower 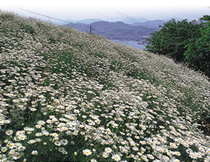 "The White Carpet Hill" in Onomichi City in Hiroshima Prefecture
Kincho maintains a memorial Pyrethrum flowers field on the south slope of ONOMICHI CITY MUSEUM OF ART with cooperation of the local government since 1980.

1929 (Showa 4) Mr. Eiichiro Ueyama was appointed Honorary Consul of the Kingdom of Yugoslavia in Osaka 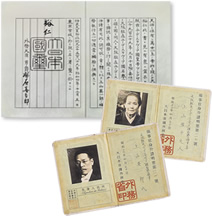 Certificate and the Lord of the King's Seals of Honorary Consul of Yugoslavia bestowed on Mr. and Mrs.Ueyama

Hanging Bell Presented by Consular Group of 5 Countries in Osaka

In 1936(Showa 11) the King Aleksandar I Karadjordjevic of the Kingdom of Yugoslavia honored Mr. Eiichiro Ueyama with CONMANDOR SANSABA medal. This hanging bell was presented by consular group in Osaka of 5 countries, United Kingdom, Germany, Finland, Sweden, and Czechoslovakia, in celebration of this award when they visited his villa in Shirahama, Wakayama Prefecture.

Although Yugoslavia was the first to have reinstated diplomatic relations with Japan among Eastern European countries after the World WarII, the friendly relationship between Yugoslavia and KINCHO had taken time to revive. After the state union of Serbia and Montenegro was born, Mr.Naohide Ueyama was appointed Honorary Consul General of Serbia and Montenegro(now Serbia) in Osaka in hope of further development of friendly relations between Serbia and Japan.

Honorary Consulate-General of the Republic of Serbia in Osaka